As my fathers day treat I got some mindfullness time alone with a camera. First was time to try out the new birdhide ably constructed at the last volunteer weekend by David, Paul and Anne. Beckhithe was very damp and a bit grey but there was soon a splash of colour with a Jay visiting […]

In between the autumnal showers this week came wave after wave of winter migrants high over the village. At this time of year both day and night skies are often full of winter migrants. The seasonal visitors this morning and overnight were redwings recent returnees from Russia and the Balkan states where they breed. They were happily feeding on berries this afternoon at Beckhithe meadow.

Photo Credit: Svenni and his Icelandic birds. Flickr via Compfightcc

Other less than usual over head fliers have included morning and afternoon squadrons of cormorants flying in V formations. These birds are presumably travelling to and from Hall Lake to fish and returning to Marlingford or Bawburgh to roost.


Originally posted on WILD HETHERSETT: Autumn is very apparent now in the trees with their browning leaves, the lack of housemartins chittering in the sky above the village. The cedar grange seed crop brings more than a summer hint as the sunflowers are blooming. Sunflower with pollenating Bumblebee (bufftailed I belive) last weekend saw the…

As we move through summer and the numbers of screaming swifts and chuckling house martins swell above the village, as family groups get ready to head south many of our other garden birds are strangely absent. Adult birds are now moulting their post breeding feathers and tend to be quiet and hide out of the […]

Wild June has brought a few surprises locally for those out getting their vitamin N(nature) into them. The first one would once have been a common bird locally and around the UK. Unfortunately like many other migrants who spend the winter in sub Saharan Africa is heading towards a terminal decline in the UK. Tracy […]

Just before lock-down took effect the wild Hethersett volunteers including the junior branch did an amazing job of pond clearing. Since then we have been able to carry out some daily exercise and pop down to Beckhithe check on the handiwork. First the frogs took up residence along with newts, dragonflies and a host of […]

via Lock down Highlights and Night Life — WILD HETHERSETT

To the East and west of Hethersett are large lakes and they attract a wide variety of wildlife and one of the best ways of seeing these is too sit quietly and watch for a while or, take a short cut and put out a camera trap. One animal that can be often seen much […]

via Tales from the riverbank — WILD HETHERSETT

A new year is under way and it starts with all those first of the years. For all bird watchers every sighting of a new bird is a first of the year so even the humble wood pigeon is special for at least 30 seconds. An early January stroll around the village soon produced a […]

via In with the new… — WILD HETHERSETT

Time for a look back at the highlights of 2019 locally and to look forward to something new. As WordPress users will be aware blogging for free has its limits and this site is close to those limits after a few years, so sighting updates from hereafter will appear on our sister site Wild Hethersett as well as the usual twitter feed. This site will be kept up to date, especially the ever popular bird walks and most who join us on the new site will notice very little change but in keeping with the new site the posts will often cover a slightly wider variety of nature than has been the case with this unashamed avian celebration.

So as is typical and fitting this is a look back at the village birds of 2019 and I will start with the above bird who is likely to star again in 2020. The reedbunting (1), the linnet  (2) and yellow hammer (3) have all done well this year and there are promising signs that good farming practices including winter seed planting are making a difference to these three stars. Anyone who has watched these wheeling about on Cedar grange this year will have also had the opportunity to watch alongside them our more typical fare of Gold finch (4) greenfinch (5) Chaffinch (6) dunnock (7) blue tit (8) coal tit (9) great tit and long-tailed tit (10).

Long tailed tit arguably the cutest of the locals.

The hedgerows have also been home to a variety of birds alongside the fields including the wren (11), robin (12), blackbird (13)  song thrush (14) and mistle thrush (15). The latter two are notable at this time of year alongside the redwing (16) and fieldfare’s (17). The spring saw the hedgerows full too, of the usual summer visitors including the now regularly breeding lesser whitethroat (18) his commoner cousins the whitethroat  (19) chiffchaff (20) and blackcap (21). Worryingly this is the third year in a row during which the lilting tune willow warbler has been absent from the village treetops.

Whitethroat still sing for us around the villages rural outskirts

Off course with all the songbirds there will be a few predators about which have included this year kestrel (22) sparrowhawk  (23) buzzard (24) and red kite (25) the latter is not much of a bird threat but one of the most impressive. Feeding on the fields and potential food for sparrow hawks have been loads of the villages most common sight wood pigeon (26) as well as their cousins stock doves (27) and collared doves (28). If I look back at garden memories from the year the most colourful are bullfinch (29) and great spotted woodpecker as well arguably  the villages smallest resident the goldcrest (30).

Great spotted woodpecker always a garden favourite when they show.

Slightly smaller than the woodpecker but arguably as colourful the nuthatch (31)  is always a regular as is the less common and colourful treecreeper (31). More colour from the crows including jay (32)  and magpie (33) as well as their more sombre cousins the rook (34) carrion crow (35) and jackdaw (36). Plenty of the usual flyover activity with black headed gull (37) common gull (38) herring gull (39)  and lesser black-backed gull (40). There were some other fly over fishermen including grey heron (41) and the less common kingfisher (42) and for the first time of counting a new entry with a little egret (43). 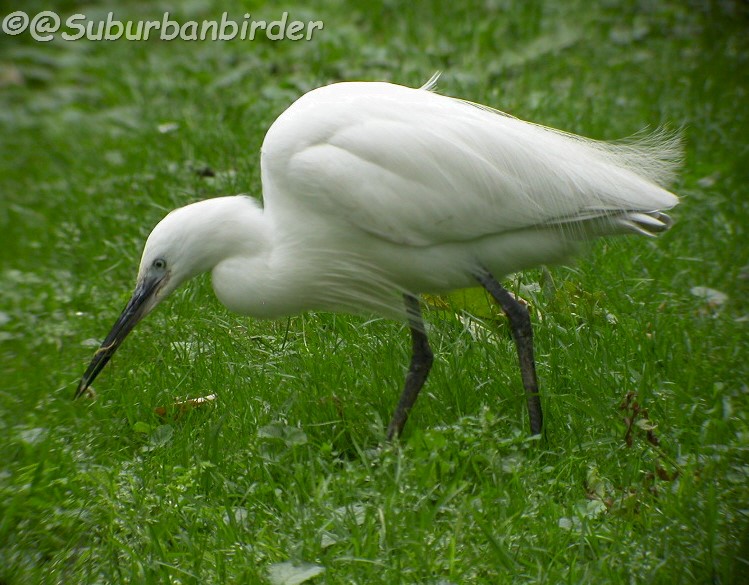 Of course the real masters of the sky turned up in the summer with Swifts (44) house martins (45)  and swallow (46) with the latter noticeable by their general absence and lower numbers year on year. Other more unusual flyovers have included Egyptian geese   (47) mute swan (48) and mallards (49) . Greylag (50)  and barnacle geese (51) have joined their watery friends and out on the ponds and wet village fringes moorhen (52) and coot (53) have both been present with little grebe (54)  and gadwall (55) as usual at the Hall. No nocturnal flyovers of wigeon this year but did manage to hear some teal (56) last week. 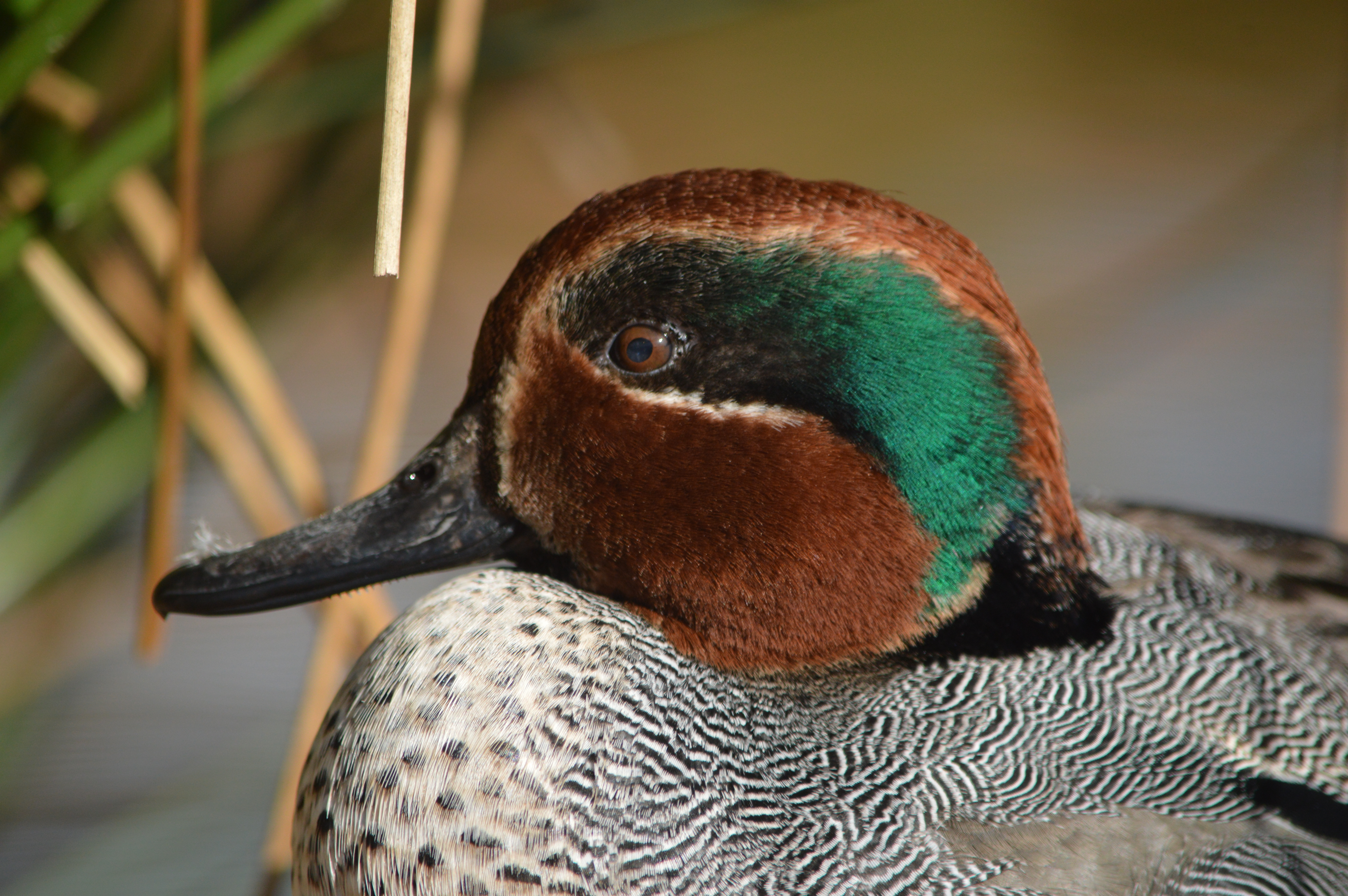 Other night time birds of course include the local owl population include the vocal tawny owls (57) and little owls (58) and briefly this year some barn owl (59) calling but unfortunately  no breeding barn owls for the second year running. Arguably the star bird in terms of unexpected was a daytime flyer was a rare local the  Short eared owl (60). So who have I missed from the list  pheasants at (61) have been frequenting the local fields but I have missed their cousins the partridges which have been close by in terms of red-legged and grey but missed by me. An other missed are the regular Canada geese which goes to show I haven’t been checking the local lakes as often as I have in the past drawn away by my more exciting WEBS areas. A large skein of pink footed geese was also missed by myself over the village in the last week or so. 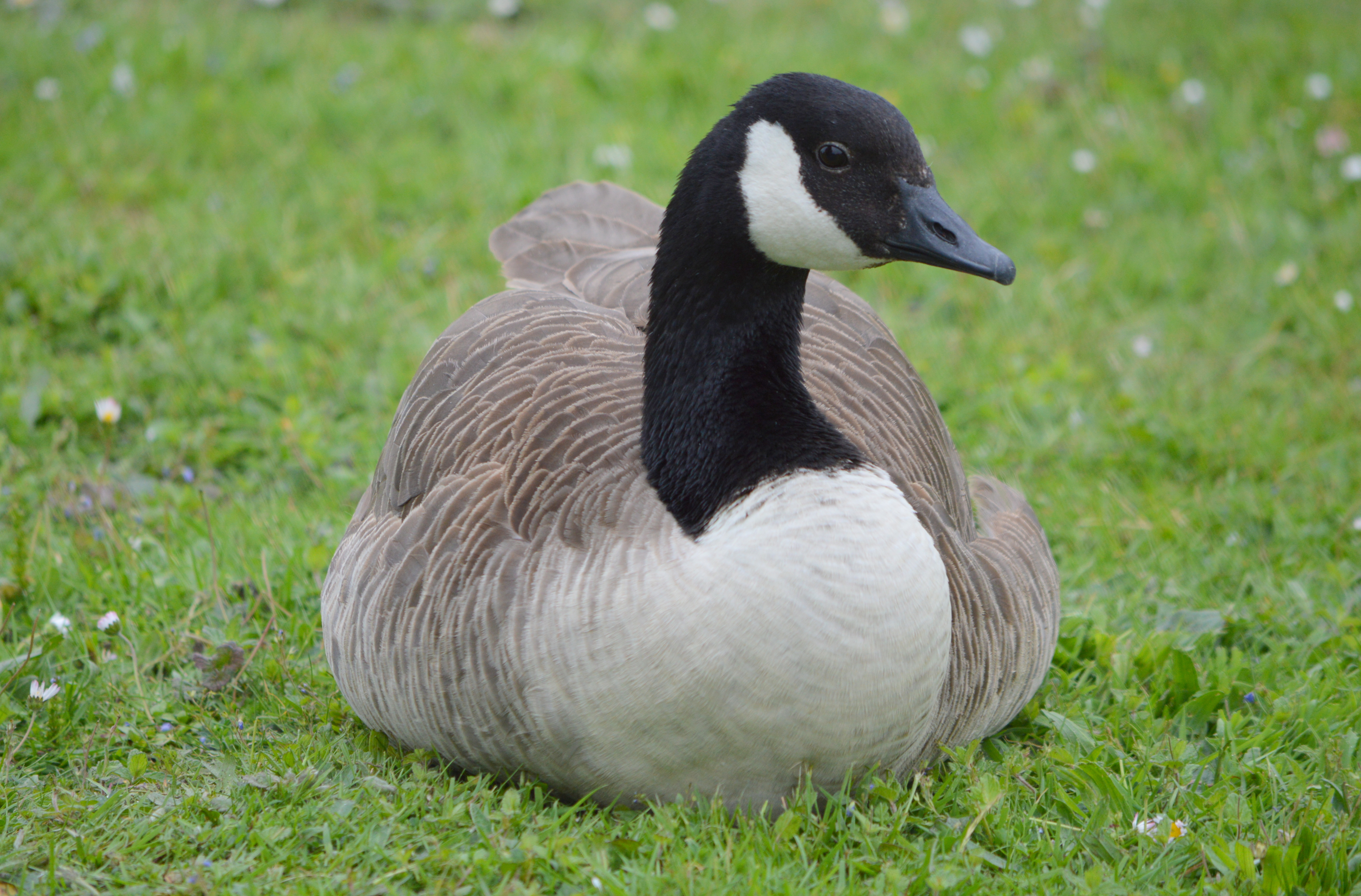 Canada goose still plentiful in the area but missed by me in and around the village.

The ever present and nearly over looked starling (62)  comes in almost last alongside the green woodpecker (63) and easily overlooked feral pigeon (64). Skylark (65) was of course one of my favourite local songsters but common tern (66)  and oystercatcher (67) both came to notice due to their vocal skills Having checked back on previous counts since the site started in 2015 this isn’t a bad  result and local birding has significantly improved my environmental credentials with 99% of my year list of 105 being from within 7 miles of home. However you choose to watch yours in 2020 Happy New Year.

The Christmas lights are up in arguably the most festive village in the UK and hopefully they are not putting migrating birds off as they fly over. Recently some of the local lakes and my WEBS sites have been hosting some special guests which have include not one but three Great white egrets and a touch down of some Brent geese. The Brent geese are residents of Northern Russia but winter on the Norfolk Coast and the wash so it is a rare treat to see these birds even briefly inland as they stopped for a breather and a freshen up before heading off again.

Whilst the geese didn’t make it onto this months official counts I did have some welcome guests as I scanned the local lake. First up were the flocks of coots and winter ducks including tufted duck ,pochard and gadwall. After a while a small flock of wigeon drifted in and made their presence known with their wild whistling calls. Just as the dusk was threatening to end an already short day I got my first sight of a little grebe for the winter and as I watched it getting closer in the gloom a little egret ghosted past looking for somewhere to settle amongst the cormorants and the larger grey heron. The only birds noticeable by their absence were the winter teal which I think may now be spread out in all the flooded pools and woodland rather than on the usual lake. 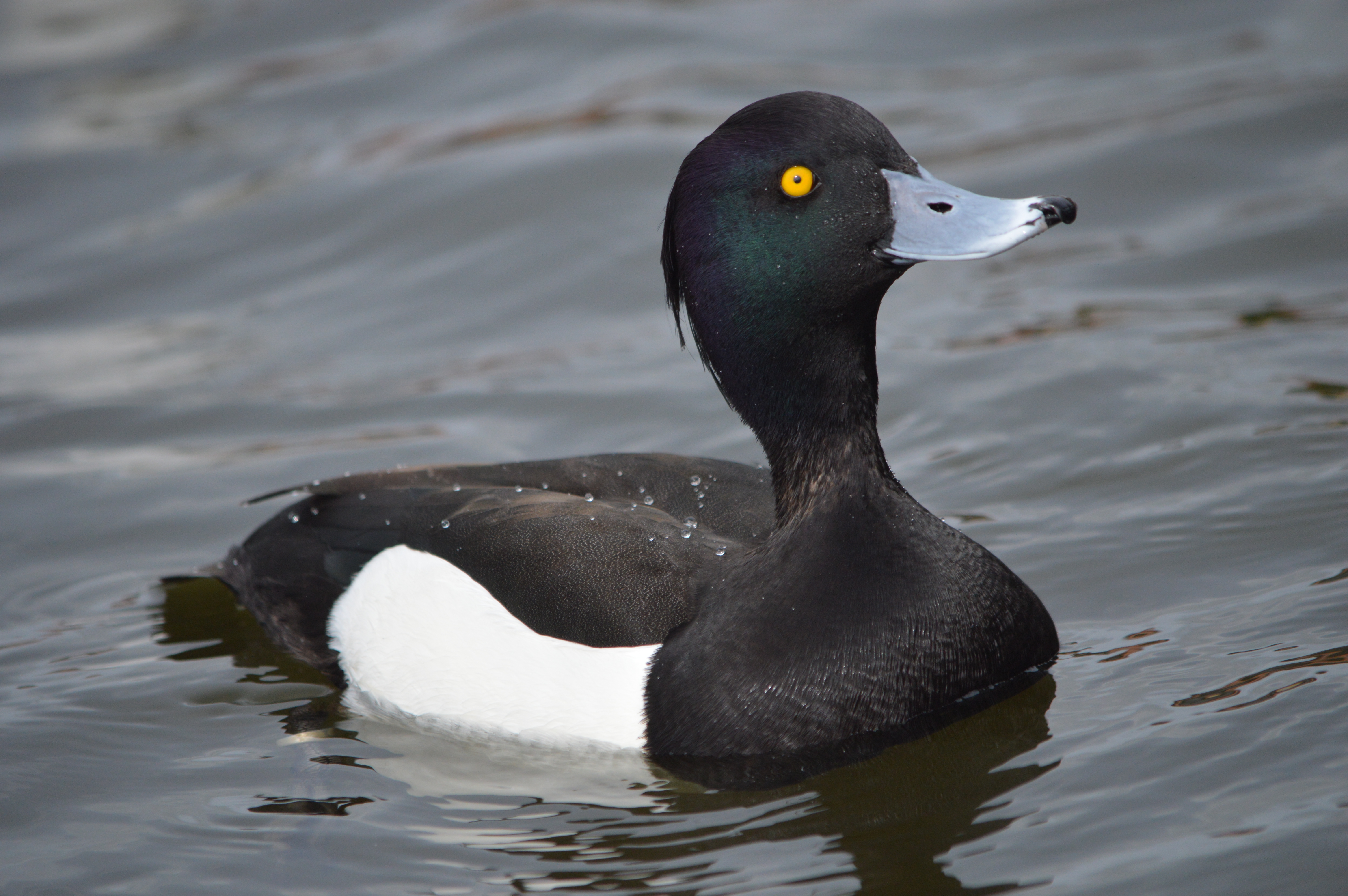 After the WEBS count I also had the opportunity on a morning that unusually wasn’t lashing down with torrential rain to wade through the mud and assist with some bird ringing. The nets were up before the dawn to see if we could collect as many of the roosting thrushes as they go up. Redwings soon made it into the nets to be rung and duly released unharmed along with a song thrush and a variety of blackbirds some local and some from northern Europe like the redwings. Perhaps the star bird however was another possible foreigner a mistle thrush clearly more bulky than his slender cousins and covered in spectacular upward pointing spots. 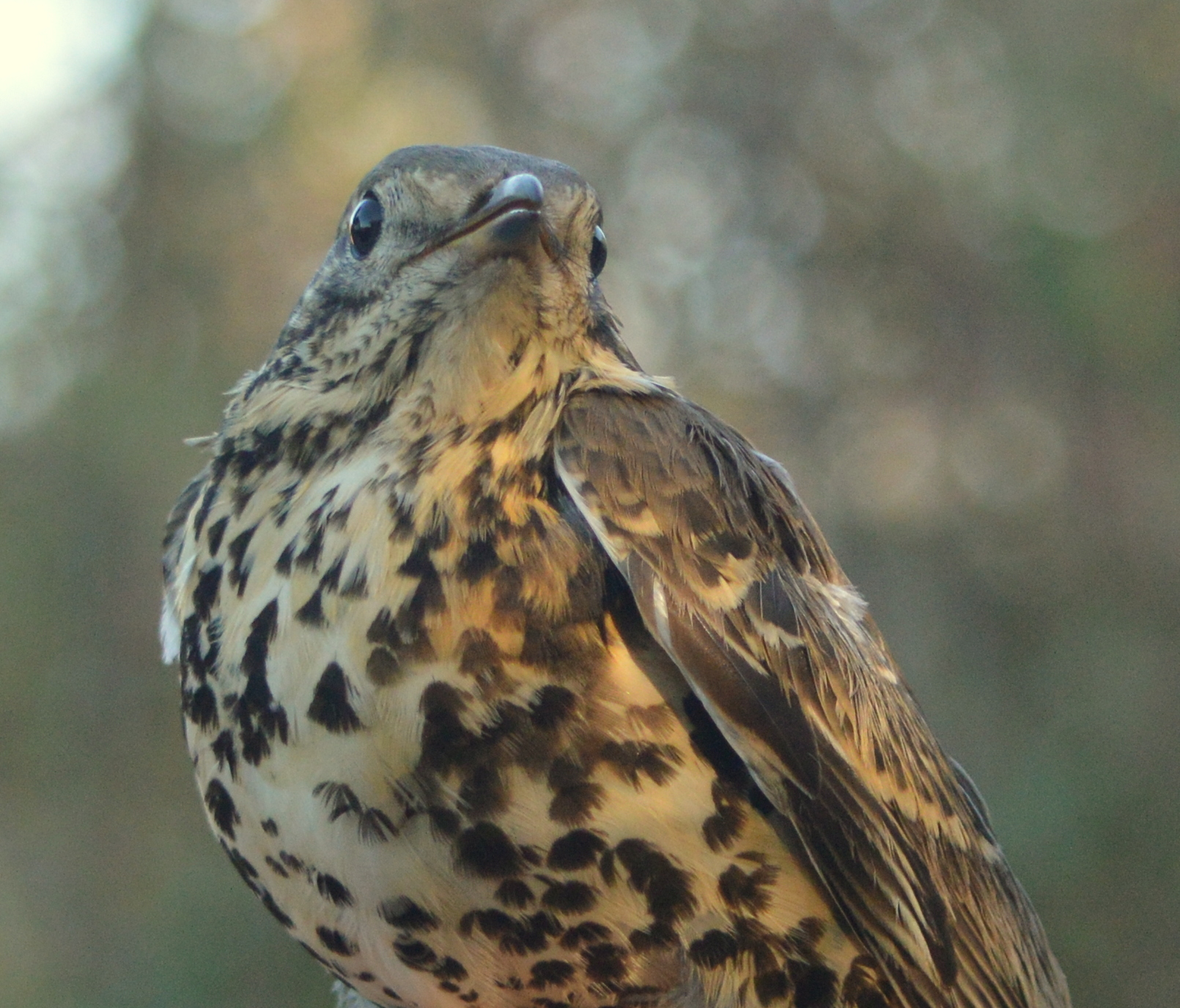 Having got Youtube functioning again this posts video comes from some derelict pig sheds which are occasionally home to one of the local barn owls. Early fuzzy camera shots have included woodmice a weasel and a variety of non owl shaped avian visitors two of whom  star this week. Who knows  maybe some owl magic next time.