August presses towards September with its usual quiet birding as the post breeding birds moult and hide out of sight and generally lay quiet. The garden is often full of squeaky youngsters including great tits, coal tits, blue tits and long-tailed tits and are joined by the occasional young robin or blackbird. The skies seem strangely empty after the last screaming swift was seen over the village on the 11th August. 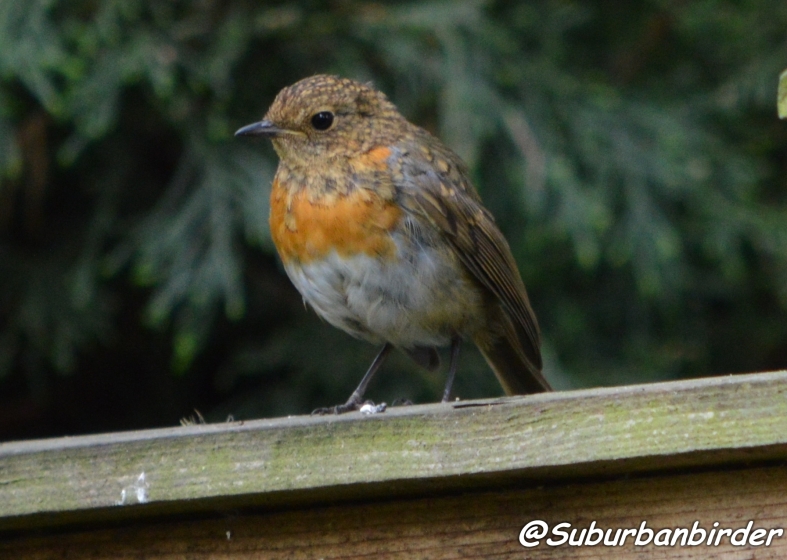 Scruffy young robin typical visitor at this time of year

This is the best time to pick out swallows and house martins all around the village but only as stray birds head inexorably south to their wintering grounds in Africa. There is still a chance to see swallows and house martins locally with Wong farm and the Around the Wong walk being good for swallows filling the wires with waiting birds. This weekend a trip to the Bell PH at Marlingford produced fine ginger beer , house martins still visiting nests and soaring buzzards overhead so also a good spot to visit.

An August visit to my local WEBS site also produced a late surprise for summer in terms of another visitor who should soon be heading back to warmer climes. I had hoped for a migrant sandpiper or other wader but none were about so I set to scanning the lake for other birds. There were plenty of young black headed gulls some still slightly downy. A grey heron stalked the edge of the reeds no longer considered a threat by previously anxious Gull parents. A few cormorants had returned after the gulls had become less quarrelsome and sat drying themselves on the edge of the island. As I watched them a delicate white bird flew past and revealed itself as one of this years common tern nestlings now fully grown.  Presumably as all the others have flow including its siblings and parents it will be finding its way to the coasts of Africa on its own or with friend it meets along the way.

The first of this posts video offerings was taken of a night time visitor near the local badger sett. This little wood mouse is one of a number who have taken advantage of food left primarily for the birds.

The second video was taken in the same spot. It is my first of one of the regular night time callers around the woods, a tawny owl caught in the rain clearly hoping for a wood mouse to make itself known.